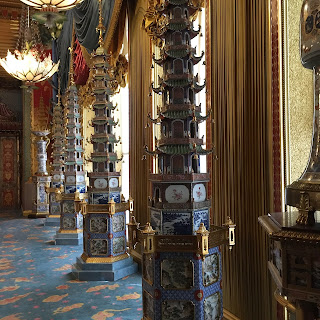 This blogpost follows 'Spode & the Royal Pavilion (Part I): Oil Lamps & an Old Chinese Vase' which has my information on the background and introduction to the main players in this story. For more click here>
Antique Chinese Porcelain Pagodas.
Impressive... but are they really big enough?
Chinese porcelain pagodas seem to have been something of 'A Thing' in the early 1800s and several, some in sets, are in the Royal Collections (RCT). I confess to getting a bit confused early on in this research with so many similar porcelain pagodas!
In the top photo*** you can see 4 magnificent 518cm (17ft) high pagodas in situ at the Royal Pavilion, Brighton which was 'the seaside pleasure palace for HM King George IV'. They are also described by RCT as 'colossal Chinese towers' which I rather like. And they use the word 'pyramid' for other pagodas in their collections too.
To make the original pagodas, which were already pretty impressive, even taller and to fit in with the scale of rooms in the Royal Pavilion, bases were added. The 'blue scagliola double plinths' were by Henry Westmacott. Josiah Spode II (Potter to the King) was commissioned to make the 'Chinese' landscape panels for the main part of the new bases. These beautiful panels are decorated with transfer printed borders in a blue fretwork pattern which surrounds the handpainted Chinese scenes. They show the great technical skill of Spode's early 19th century ceramic manufacture. The gilded metal work was by Benjamin Vulliamy*.
Spode's ceramic panels are likely to have been made from their stone china body which was developed to imitate, and match, Chinese porcelain in look, feel and quality. It was in production by 1812 but the exact date of introduction is unknown. Certainly some of the other pagodas in the Royal Pavilion have bases which are marked with the Stone China backstamp (mark) which is in the style of a pseudo-Chinese seal.
Together with this set of four pagodas, two more pairs are in the RCT (RCIN812 and RCIN 2400) and were installed at the Royal Pavilion. These also had ceramic base panels made by Spode. The two other pairs of Chinese porcelain pagodas were of different designs and had different panels made by Spode for their bases.
All these pagodas can be viewed in detail on the RCT website.**
Here you can also find other Spode items, as well as those made at a later date when the company was owned by the Copeland family, which are in the RCT. To view them use the link at the end of this post. Then use the search option and search on Spode, select the tab 'What' to find the details of the various Spode objects including the pagoda sets. Unfortunately it is not possible to link directly to the Spode pagodas.
If you would like to marvel at the skill of how to put a pagoda together from all its component parts, please click Assembling a Pagoda and page down to watch a time-lapse film which is great fun.
_________________
Acknowledgments and notes:
Taken from my lecture 'The Josiah Spodes: Pottery Pioneers'
Thanks to Robert Copeland (1925-2010) who sparked my interest in and researched and wrote about this subject sharing his knowledge with me. In particular his article 'Jars for the King', published in the Spode Society's 'Recorder'. More about the 'Jars' will appear in the next instalment.
* Benjamin Lewis Vulliamy (1780–1854), succeeded his father as head of the firm and Clockmaker to the King. Although his formal education is unknown, he evidently received a thorough training in both the theoretical and practical aspects of the business. By 1800 he was already helping to run the firm and after he became a partner in 1801 his involvement rapidly increased, so there was little immediate change in the firm's direction when he took over in 1811.
The New Pocket Cyclopædia contains a report of the Prince's visit to Spode in 1806. 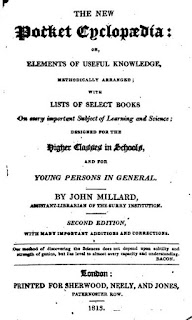 Terry Woolliscroft's Potbank Dictionary for explanation of words associated with the Pottery Industry.
Thanks to Pat Halfpenny with whom I swapped notes images, information and enthusiasm about this subject.
Royal Pavilion history - click HERE>
**Royal Pavilion objects in the Royal Collection Trust (RCT) - click HERE>

***Thank you to Patricia Ferguson for the photo showing pagodas in situ at the Royal Pavilion. Patricia is on Instagram: @vasemadness
More images from another blog called 'RosemaryandPorkBelly' here> and specifically Spode here>
HM King George IV (1762-1830): Regent (1811-1820); King (1820-1830)
Posted by Pam Woolliscroft at 15:33

Pam Woolliscroft
Loves pots... a lot. Once upon a time worked in museums (including curator of the Spode museum). Blogger & author. Fond of archives. Encourages a wild garden. Draws a bit. Blogs 'Spode History' and 'Spode ABC' which have been accepted by the UK Web Archive which preserves selected UK websites. Also blogs 'An English Garden' and 'A Royal Signals Sergeant'. Twitter:@PamWoolliscroft Instagram:@pamelawoolliscroft

The Spode Archive, deposited at the Stoke on Trent City Archives, is accessible to the public. Enquiries should be emailed to: [email protected]
Please visit my page The Spode Archive for full information on how to find out about your Spode and Copeland pieces and any Spode research you may wish to undertake.

How Many Visitors to Spode History?