B Patterns
Click Spode and the B Book for more information on this range of patterns from Spode.

In about 1973 Spode commissioned four figures from the sculptor Enzo Plazzotta. For the project the Spode company developed a new ceramic body called Spode Studio Porcelain which was similar to the parian body developed at the factory in the 1840s.

Plazzotta was born in Mestre, near Venice, in 1921. He studied sculpture and architecture. After spending many years establishing the reputation of his studio, Plazzotta began a series of sculptures in 1967 depicting the ballet dancer Nadia Nerina and, later, Rudolph Nureyev. Following these world-acclaimed studies came a series featuring Vanessa Redgrave in her film role of Isadora Duncan.

The subjects chosen for the project with Spode were Antoinette Sibley and Anthony Dowell - one of the all-time great partnerships in ballet. Four studies were produced and fitted with a removable black marble base. Some figures were supplied without the base, particularly 'seconds'.


Barbecue
Click on Barbecue to take you to my blog about this unusual pattern. You can also find more about Tricorn shape, on which the pattern was produced, under T.


Beaton, Cecil
To find out about the connection between Spode and Cecil Beaton click here.


Billingsley Rose
Billingsley Rose pattern was the most popular design on Jewel shape. The original shape design was devised for a dessert service, possibly made for Queen Victoria, to the design of W. H. Goss, Art Director at the factory. In the original service, each of the embossed circles on the border was fitted with a mirror-backed glass gem which simulated rubies, emeralds and topaz.
Jewel shape was expanded into a range of tableware and registered at the London Patent Office as No. 70392 in 1924. It was patented in the United States on 15 June 1926. The tableware range was determined by the needs of the North American market - Spode's biggest market. In an ivory earthenware, undecorated it was called Jewel Imperial and proved to be very popular.

Billingsley Rose with pattern number 2/8867 was introduced 1930, discontinued in c1989 with a brief reintroduction in the early 2000s. The pattern took its name from William Billingsley, a famous flower painter, who worked for the Derby and Worcester factories, amongst others, at the turn of the 19th century. Although Billingsley never worked for Spode, the roses were inspired by his style. The pattern was originally printed and then hand coloured but from 1972 it was produced with slide-off lithography (known as water slide at Spode).

Another version of the pattern in yellow, followed the same design. It was called Yellow Rose and was introduced in 1932 as pattern number 2/9673 and discontinued July 1st 1969.

Books on Spode
There is a booklist on my Spode History blog just click here> There are also some dedicated blogs which I have written for some of the best books on Spode history. 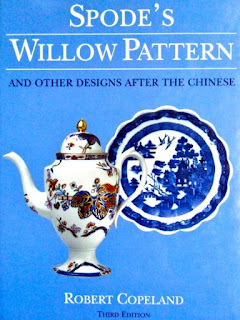 Botanical
This is the name of a Spode pattern introduced in about 1828. Click here for an image of a salad bowl in this pattern.

Bottle Ovens
In 2018 to celebrate the 40th anniversary of the Last Bottle Oven Firing I co-authored the book 'Bottle Ovens & the Story of the Final Firing' with Terry Woolliscroft
Published by:
Gladstone Pottery Museum August 1st 2018, ISBN 978 0 9505411 3 6

For lots more about bottle ovens click/tap Bottle Ovens where you will find helpful links.

For facts and figures about the Spode bottle ovens and kilns, including pioneering 20th century developments after the Clean Air Act of 1956, click/tap Spode's Bottle Ovens

See Savoy on the S page

Bridge I is usually seen on toilet ware and drinking vessels and is thought to pre-date Bridge II on bone china. The principal difference between these two patterns is the border. Bridge I has a rosette between the drape motif and Bridge II has a butterfly. Bridge II is scarcer and is found on bone china plates and dishes. The border is a closer copy of 18th century Chinese porcelain from which the designs originate.

The third version has become known as Queen Charlotte  with pattern number 1/3822 of 1884. It is is a later engraving correctly called New Bridge. The new engraving appears to have been called Queen Charlotte following the publication of a company booklet which includes a description of her visit to Spode and depicts this pattern at the top of the page. As Queen Charlotte died in 1818 there is no connection between her and the pattern although the pattern name is sometimes printed on the ware.

New Bridge (Queen Charlotte) was also produced as pattern 1/3870 in bone china in Boston shape with gilded detail. The 1/3822 version of the pattern was on stone china with a gold edge.

More information about Spode's Chinese designs can be found in Robert Copeland's 'Spode's Willow Pattern & Other designs after the Chinese' detailed on my booklist.


Bute Shape
Bute is the name of a teaware shape made by Spode and many other manufacturers. Introduced around 1800 or even earlier it was a popular shape until the 1830s. It is believed to have been named after the Earl of Bute who suggested the name to Wedgwood.
Many potters manufacturing in the late 1700s/early 1800s, including Spode, did not always mark their wares. The variation in the shape of these similar cups and in particular their handles helps to identify which manufacturer made them. Have a look at my blog Spode and Cup Handles for more information.


Buttercup
Click Spode and Buttercups and Dandelions for my blogpost on the Buttercup pattern. 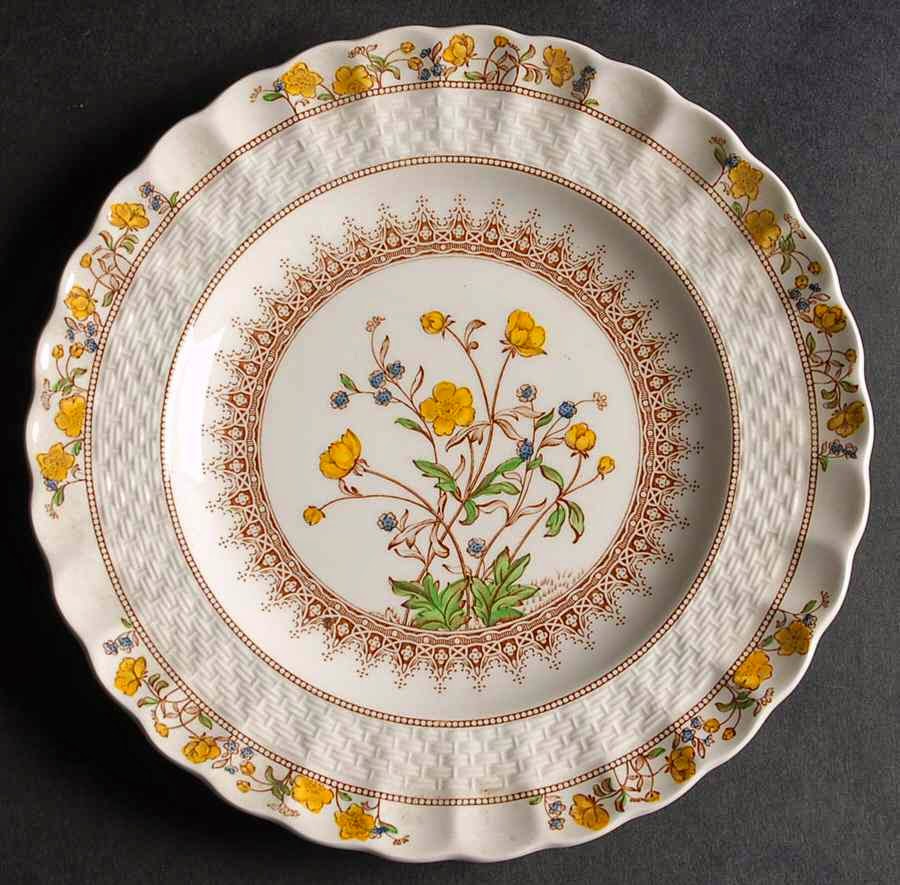 Byron
This pattern is usually referred to as Spode's Byron and can be found on the S page. It is not the same pattern as Byron Views.

Multi-scene patterns for underglaze printed wares were introduced in the early years of the 19th century by Spode. It is possible Spode II was also the first to produce the topographical subjects that were to become so popular. The famous Indian Sporting and Caramanian patterns date from 1807 and 1809 respectively. Spode's successors, Copeland and Garrett, expanded the range of multi-scene subjects often issuing scenes which had a topical popular appeal such as Wellington which depicts scenes of the Iron Duke's famous victories.

In 1832, Lord Byron's publisher, John Murray brought out the first of three volumes of engravings entitled 'Finden's Landscape and Portrait illustrations to the Life and Works of Lord Byron'. Depicting scenes associated with the poet's life, it was engraved in exquisite detail by the brothers Edward and William Finden.