HALF CAST Process. Clay end. Casting. May be peculiar to Twyfords. Preferred on Friday when a caster can get off home early. Instead of all the moulds in a round being cast, the caster will only process a portion of them, called a half round or half cast. Regrettable derogatory undertones. Many thanks to David Broadhurst for suggesting this term for inclusion, March 2016

HALF-ENDER Half a building brick. Used as a scotch when placing a bottle oven.

HALF ROUND See above half cast.
HALF TRACED Decoration. The detail of the style of decoration for the handle of a cup or other holloware. The gilder or tracer would paint a delicate and tapering line of gold (or other colour) on the outside edges of the handle. The line or trace only goes halfway around the handle. See trace where the line goes all the way round the handle - also known as fully traced. 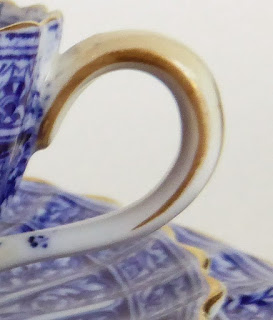 HAMMERED Glaze fault. Similar to orange peel. Looks ugly and unacceptable. May be caused by over-glazing.

HAMMERED Inebriated pottery worker. Usually just after being paid, perhaps on a Thursday or Friday.

HANDLE CUTTER Occupation. Potting department. Usually a female who removes the soft recently cast tea cup handles from the mould an proceeds to remove excess clay with a sharp implement, then fettle and sponge the handle to shape. Skilled.

HANDLE CUTTER Machine. Used in the potting department. 1941? The start of automation to speed up and reduce the cost of handle cutting.

HANDLE DESEAMER Occupation. Potting department. The person who uses a sharp tool to remove the seam created during the casting of cup handles in a mould.

HANDLE MAKER Occupation. Potting department. Clay end. Makes handles by casting or by pressing plastic clay into a plaster of Paris mould, for the handler to apply to the cup, jug or other holloware.

HANDLE MOULD Equipment. Plaster of Paris. Sometimes single handles are cast in one mould.  Some times up to a dozen per mould. In the early days single handles were made by pressing plastic clay in the mould which consisted of two pieces.

HANDLER Occupation. Potting department. Person who applies a clay handle to a clay cup using a touch of clay slip to hold it in position. Male or female and highly skilled.

HANDLING Process. Potting department. Fitting and fixing handles on to cups. In the majority of pottery articles, handles are/were made separately in individual moulds and applied to the pieces subsequently by a process of sticking up. The handles are fixed to the teacups, teapots, jugs, etc., by moistening the faces of the respective pieces and uniting them by pressure. By this means, and the subsequent firing, the two are effectively welded. In some instances handled pieces are produced by a simultaneous casting of the body of the article and the handle in a two-part plaster mould.

HARDENER Material used in the glaze recipe to give the glaze dry strength after it had been applied and dried onto the piece. Prior to firing.  Helps prevent knocks during handling.

HARDENING ON Process. Decorating department. Biscuit ware which has been decorated with an underglaze print or with hand painted pattern needs to be hardened on so that the decoration won't smudge during dipping in glaze. Hardening on also burns away the oils with which the colours have been mixed; otherwise the liquid glaze subsequently applied would not adhere to the coloured parts.The hardening on fire is relatively low temperature at about 700ºC  and ensures that the applied colour is not disturbed during dipping and that the oils in the colour are are evaporated or burned away.

HARDENING-ON MUFFLE KILN Particular type of bottle oven. Biscuit ware which has been decorated with an underglaze print or with hand painted pattern sometimes needs to be 'hardened on' so that the decoration won't smudge during dipping in glaze. The hardening on fire is relatively low temperature at about 700ºC  and ensures that the applied colour is not disturbed during dipping and that the oils in the colour are are evaporated. more here>

HARD GLAZE  Description of a glaze which does not fuse at low temperatures.

HARDINGE MILL  A ball mill for continuous operation in which the casing is in the form of two conical sections joined by a short, central, cylindrical section; the material to be ground is fed into the mill through one of the hollow trunnions, being discharged through the opposite trunnion. Named after H. W. Hardinge, USA, who invented this design of ball mill in 1906.

HARD PASTE PORCELAIN Type of porcelain with a particular recipe and requiring particular high temperature firing conditions to create vitrification. A term still used by collectors. A 'true' porcelain. This is a 'felspathic' porcelain compared with 'fritted' porcelain which is described as soft paste. Hard paste is often pale grey in appearance and is extremely hard. The ingredients melt and fuse into a dense strong body. Translucent - will allow bright light to pass through it. Hardpaste porcelain recipe: 50% china clay, 30% china stone, 20% flint. Biscuit firing at 900°C to 1000°C. Glost firing at about 1350°C to 1400°C.

HATCHEL Equipment. Tool used in the potting department by a dish maker. Used in dish or large holloware pressing to 'scrap' excess clay from the mould rim.

HEAT WORK The combined effect of temperature and time on the pottery body during firing.

HEATING UP DUNT Pottery fault. Sometimes known as an IN-DUNT. A body crack created during the heating cycle of the firing process. Characterised by smooth and rounded edges to the crack because the glaze flows into it and matures after the crack took place. cf 'out dunt.'

HERS SELL Dialect. Herself.

HILLER also known as ILLAS  Also with the spelling HILLAR A saggar. Equipment. A saggar with a particular shape and used for a particular purpose in a bottle oven during firing. One of many different shapes of saggar. A shallow saggar with very low sides and a full base to cap the top of a pile or bung (a stack) of several saggars. A lid. Sometimes a bat is used. Sometimes hillers were turned upside down and used to stand on, like steps in the oven.

HIS SELL Dialect. Himself.

HOB Part of a bottle oven. Just above the glut arch. In dialect it is known as thob. "Put thee lobby on thob fur cape eat ot, duck."

HOB-MOUTHED OVEN Particular design of firemouth in a bottle oven. An example of this still exists (2021) at the Falcon Works in Sturgess Street, Stoke. It is also known that the Spode Company of Stoke used this design.
The firemouths of these ovens projected from the firing chamber side walls by about 2 feet (0.6 metres) to create a hob or shelf.  A square hole constructed in the top of the shelf was used to bait (feed or stoke) coal onto the firebed below. The hole was covered, when baiting was not being carried out, by a fireclay slab. This method of baiting through the top of the hob was regarded as 'old fashioned' but it had the distinct advantage that cold air was prevented from rushing in and being drawn into the oven flues during baiting (unlike a firemouth with opening front doors which did allow cold air to be sucked into the interior of the oven). A hob mouth may have been much more strenuous to bait since the ovenmen had to raise a shovel full of coal from ground level to chest height prior to pouring it onto the firebed. Generally, a hob mouthed oven was of the updraught stack oven type.

HODGE Dialect. Cow's stomach. Offal. Sold in a tripe shop.
HOFFMAN KILN Type of 'continuous' kiln for firing bricks and tiles. Patented by German Friedrich Hoffmann for brickmaking in 1858. The kiln consists of a main fire 'passage' surrounded on each side by several small firing chambers. Each chamber contains a stack of unfired bricks. In the main fire passage there is a 'fire wagon' which holds a fire that burns continuously. Each individual chamber is fired until the bricks are vitrified properly, then the fire wagon is moved on to the next chamber. Each chamber is connected to its neighbouring chamber by a flue  which carries exit gases from the chamber being fired. There the gases preheat the bricks waiting to be fired.
HOLDCROFT BARS Equipment. Pyrometer. Pressed and pre-fired ceramic bars made of blended materials so proportioned that, when placed horizontally with only their ends supported, and when heated (fired) under suitable conditions, they will sag at a stated pre-determined temperature. The bars are numbered from 1 (bending  at 600°C) to 40 (1550°C). These bars were introduced in 1898 by Holdcroft & Co.


HOLLOW NATCH Part of a multi-part mould. One half (the hollow half) of a location device which ensures all parts of the mould locate together, correctly aligned. May be in copper or plastic.

HOLLOWARE PRESSER Occupation. Potting department. Skilled male or female who uses a thin slab of wedged clay and presses it by hand into the surface of a plaster of Paris mould.  The clay then takes the shape of the mould and dries quickly as the plaster absorbs water from the clay.

HORNIMENT  Decorative pottery referred to by a person who gets his or her vowels and consonants utterly (hutterley) mixed up. As in Anley or Hanley. Or Has and As. Or Hand and And. Or And Hand Hand.


HOT HOUSE Alternative name for green house. Department in a potbank. Heated room containing green ware (unfired but dried to a clay hard state) which is ready for inspection and storage prior to firing.

HOT PRESS PRINTING  Process. Decorating. A method of decoration on both 'under the glaze' and 'on top of the glaze' on the pottery piece. (also see transfer printing here>)

HOTELWARE Tableware of extra strength (usually achieved by extra thickness) for use  in hotels and restaurants; for specification see British Standard B.S.4034, which demands no crazing after 16 hours in an autoclave. Dudson and Steelite (American owned) are renowned Stoke-on-Trent manufacturers of hotelware.


HOUSTER ARCH Part of a bottle oven. Alternative name for the glut arch positioned below the baiting mouth.

HOVEL Part of a bottle oven. Huge cone or bottle shaped brick structure built to fully enclose the main business end (the firing chamber) of the oven. May be up to 70 feet high. The hovel creates draught, takes away the smoke and protects the firing chamber from the weather.

HOVEL OVEN Type or particular design of bottle oven. No two designs are ever the same. The firing chamber itself stands in the centre of a circular freestanding hovel built of brick and shaped like a bottle. The neck of the hovel forms the chimney which creates the draught and carries off the smoke and gases from the burning coal. Sufficient space is left between the outside of the firing chamber and the hovel wall to allow the fireman to wheel in coal in a barrow and to shovel it onto the fire in the mouths (baiting). The hovel fully protects the fires in the mouths from the elements. The heat created within the hovel is unbearable during a firing. More about bottle ovens here>

HUMP ARCH Part of a bottle oven. Details required for this.

HUMP NATCH Part of a multi-part mould. One half (the humped half, not the hollow half!) of a location device which ensures all parts of the mould locate together, correctly aligned. May be in copper or plastic.  See natch.

HUMPER Pottery ware fault. Opposite to whirler. A humper is a fault on pottery flatware. It appears as a bowed base, causing the plate (or other flatware) to dome upwards. It looks ugly and causes gravy to accumulate in a ring around the edge of the plate. Regarded as seconds, or if its really bad, lump.


back to top>
Home