Icepails
Click Spode and Ice to learn about Spode's 'icepails' and more.


Imari
Imari Porcelains: from the early 18th century, porcelains made in Arita in the province of Hizan, in Japan, were imported to Europe from the port of Imari. These so-called Imari porcelains, characterised by the predominant use of a cobalt blue, iron red and gold palette became increasingly popular in England as the century progressed. Known as Japans in the 1750s and 1760s they were copied extensively by English porcelain companies such as Chelsea and Derby. The East India Company was prohibited from importing these wares in 1799.

Spode's Early Patterns: the demand for replacement pieces and, subsequently, for original designs, was admirably met by English manufacturers. Spode was amongst the first to produce them; the first recorded pattern dates to c1805. Imari patterns dominated the Spode pattern range from this date until around 1815. Interest only faded after the Derby factory flooded the market with a lower standard of ware around 1818.

Spode's Imari ware was of a very high standard, skilfully painted and gilded on a high quality bone china body. The wonderful lustre imparted by candlelight to the rich mercury gilding has inspired the name 'Candlelight Patterns'.

Spode's Later Patterns: the Imari designs enjoyed a revival at the end of the 1880s and into the early 1900s with many variations produced on teawares, dessert wares and tablewares as well as ornamental pieces. The designs were also use on toilet wares.

The patterns proved popular again in the 1990s when the company introduced several as part of the Cabinet Collection.


Incense Burners
Find out about the types of incense burners manufactured by Spode in the early 1800s and how and why they were used by clicking 'Spode and Incense Burners'. Illustrated here is one of the shapes of incense burner produced decorated in pattern 3967 which is a version of a design known as Tumbledown Dick. Click the link to go to the T page of my Spode ABC for more information about this popular design.

India
You can find out about this pattern, first introduced in about 1815, by clicking Spode and India 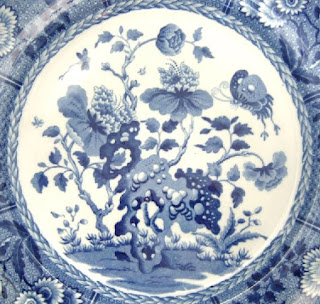 Also look at Chinese Rose pattern on the C page - the pattern was derived from India pattern.

Indian Sporting
You can find out about this pattern, first introduced in about 1815, by clicking Spode and Variations on Indian Sporting Pattern.


Inkwells
Information about slipper inkwells can be found on 'Spode, Shoes and Slippers'. Click HERE>

Images of inkwells made by Spode can be found in the 1820 Shape Book featured on Spode Exhibition Online.


Italian
Click Spode and Italian Pattern to take you to much more information about this iconic Spode pattern.

There is also more if you click here for my blogpost entitled Spode and Italian...with added colour.

For information on backstamps, or marks, go to my blogpost Spode and Italian Backstamps

Everything about Italian pattern is now summarised, with links, on my dedicated Spode & Italian page: click here.

Ivanhoe
Click here to take you to my blogpost Spode and a Soup Plate which mentions this pattern.


Jacinth
Jacinth pattern is a 20th century design produced on Flemish Green earthenware body. Go to the F page for more on this stained green body.

Jacinth has pattern number S2850 which was first recorded 1954. You can see an image of the pattern by clicking Spode in 1956.


Jasmine
Jasmine pattern was first introduced in about 1825 in a plain blue transfer print and was usually produced on Gadroon shape. Variations of this plain printed design were also produced with each variation being allocated a unique pattern number. These are recorded in the Spode Pattern Books in the Spode archive.

Another version of Jasmine has pattern number B118 of c1826. This is printed in blue then the detail picked out by hand painting in orange. The B prefix to the pattern number denotes that all the decoration was applied underglaze.

The pattern takes its name from the stylised jasmine entwined around the centre pattern of large flowers - the same jasmine is also in the border. In the middle of the 19th century a Jasmine border design (ie no centre to the pattern) was registered with the British Patent Office on 4th August 1852 with registered number 86071. This could be used with all sorts of different centres to create a huge number of patterns including being used as the border for various armorial wares produced as special commissions, for example for a service for Countess Newburgh.

The pattern was also known as Jessamine and is recorded in the Spode archive under both these names.Throughout the 20th century and into the 21st the pattern was produced in a variety of colours and combinations, including the centre with a border from other old Spode patterns, such as Blue Rose, (seen here in the unlikely brown/pink colour way c2005), as well as on different shapes. In 1996 Jasmine was reintroduced by Spode as part of the Blue Room Collection as one a collection of six Regency Dresser Plates and in the early 2000s as part of the special Signature Collection range.

The pattern name Jasmine should not be confused with a mid-20th century mark on Spode of Royal Jasmine which refers to a pale creamy yellow glaze and is not a pattern name nor a design.


Jewel Shape
The design of Jewel shape originates from the 1850s when a sumptuous dessert service was made, possibly to the order of Queen Victoria and designed by W. H. Goss, Art Director at Spode. In this original service, each of the embossed rings on the border of the service was fitted with a mirror-backed glass gems which simulated rubies, emeralds and topaz. The service was for presentation in 1857 but a mystery exists concerning the original set as it is not know for what occasion it was ordered (page 167 in Spode & Copeland Marks and Other Relevant Intelligence by Robert Copeland gives a full account of the special dessert service. Details of the book can be found on my booklist).


The range of tableware items known as Jewel shape was modelled in the 1920s based on the design of the 'gem' dessert plate, moulds of which survived at the Spode factory. Knowledge of the magnificent dessert service mentioned above does not seem to have been known at the time for the shape was attributed to a painting of a halo around a saint in a medieval painting. But the name Jewel must have been on the mould. The shape was registered at the London Patent Office as 70392 in 1924. It was patented in the United States on 15 June 1926. These numbers are sometimes included in the backstamp. The tableware range was determined by the needs of the North American market.
Jewel shape was withdrawn in 1989 but made several reappearances until the closure of the Spode company in 2009.

The most popular pattern on the shape is Billingsley Rose, with pattern number 2/8867, first recorded in about 1930 (detailed on my B page).

Details of some of the other patterns on the shape are:

Joke Cups
These outsize cups and saucers were known at the Spode factory as Joke Cups, Magnum Cups and, in the latter part of the 20th century, Jumbo Cups. They seem to have been produced with a wide variety of patterns although there is no complete record in the archive. They are sometime called breakfast cups but are much larger than the usual breakfast cup.

The term Jumbo Cup, at Spode, seems to be quite modern - from 1995 onwards. Earlier catalogues refer to the cups as Joke Cups and Magnum Cups. There is no list of all the patterns used on this shape but information about the designs is found in some of the catalogues in the Spode archive. Sometimes Joke Cups were decorated in a favourite pattern and were noted as available 'with or without the motto'. The motto in question was usually Auld Lang Syne. For example Italian pattern often had its own catalogue and as early as the 1920s the Joke Cup is listed as available with or without the motto.

In catalogues for the USA from 1962 and 1965 there are Joke Cups and Saucers listed in Indian Tree, Camilla Blue or Pink, Tower Blue or Pink and Greek Brown. These do not appear in the UK catalogues.

Some other patterns known to have been produced on the Joke Cup are as follows:
• Spode's Byron - a photograph from the late 1930s illustrates the Jumbo Cup and Saucer with just the pattern and no motto. It also features as a Joke Cup in a 1958 catalogue.
• Blue Bird: - this pattern dates from about 1958 with pattern number S3274. There is no reference to a Joke Cup in the archive but one is known in a private collection.
• Spode's Tower: - this pattern with the motto features in the 1958 catalogue as well as in the 1960s USA ones and it is likely that Tower would be one of the patterns that was available in the 1920s with the motto.
• The Hunt: -in a leaflet of about 1938 the Jumbo Cup is referred to as a Joke or Magnum Cup featuring this design. It also appears in the 1958 catalogue.


There may have been many more designs produced on this large cup and saucer which are not recorded in the archive. For example Peplow and Rosebud Chintz are known as patterns on the shape which are in private collections but with no record known.

From 1995 what became known as the Jumbo Cup was produced as part of Spode's Blue Room Collection. In 2000 they were available in British Flowers, Geranium, Greek, Italian, Tower and Camilla patterns.

Jumbo
EITHER a large cup - see Joke Cups above.

OR a parian letter weight (paperweight) in the shape of an elephant sometimes with the name the name Jumbo after the famous mid-19th century 'celebrity' elephant. 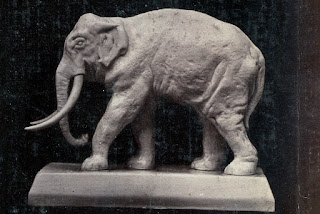 See the P page for a little about the parian body.